To be released on LP and digitally on 7/24/20. Artwork by Sam Kahn. Last physical product to feature the OG HausMo logo. This is the catalog page with album information and artwork. To view the store page, click here.

Quicksails is the recording project of Chicago-based producer and multi-instrumentalist Ben Billington. Central to the Chicago experimental scene and its various veins across the midwest and national DIY circuit, Billington has been championing freak music of all stripes for over a decade at this point. The social and musical aspects of his craft are inextricably tied together in his roles as a consummate collaborator and member of bands over the years, as well as a booker, promoter, and crucial social lifeline / go-to point person for anyone touring through the region. Billington has performed as a member of numerous ensembles including ONO, ADT, Circuit Des Yeux, Tiger Hatchery, and Ryley Walker’s band. In an improvised setting, he has collaborated with a stable of musicians including John Olson (solo and with Wolf Eyes), Rhys Chatham, Mark Shippy (US Maple), Owen Gardner (Horse Lords), and Paul Flaherty.

Billington’s role as a producer at Chicago avant epicenter Elastic Arts and his co-curation of the venue The Hideout’s long-running Resonance Series has paired future-facing acts from around the world with Chicago’s finest to enrich the city’s thriving progressive music scene with stimuli of the highest, headiest order. His work with Chicago non-profit foundation Experimental Sound Studio has grown recently to include a lead role in their series The Quarantine Concerts, setting up diverse bills of international luminaries for live-streamed concert events. He also has been a founding figure in the curation and on-the-ground operations of Voice of the Valley, a proudly DIY experimental/noise festival that takes place each year in a wooded meadow in West Virginia, spearheaded primarily by the community surrounding his native Cleveland, Ohio. Billington’s integrated social/musical practice has established him as a benevolent figure to a generation of artists in various overlapping Midwest scenes and beyond, as he dedicates his life to giving others a platform for their work and providing them with room to grow in so many directions.

Billington’s prolific solo recordings as Quicksails have run the gamut of everything from free-jazz inspired electro-acoustic production, to rhythmic synth-pulse tapestries, to music focused on what could be considered his primary instrument among the many he works with: the drum kit and auxiliary percussion. Blue Rise, his second full-length LP to appear on Hausu Mountain after Mortal (HAUSMO52, 2016), ranks in as the 100th release in the label’s catalog. The album follows HausMo cassette releases The Bright (HAUSMO76, 2018) and a split with Head Boggle (HAUSMO21, 2014). Outside of Hausu Mountain, Quicksails releases have appeared on labels like Spectrum Spools, NNA Tapes, and Digitalis. With Blue Rise, Quicksails returns from a relatively long period without any officially released material with an album rooted above all in detailed synthesis and electronic arrangement, rather than his more improvised, jazz-influenced leanings. While those latter influences can’t help but remain in play for any of his recordings, Billington’s approach on Blue Rise foregrounds his palette of modular and digital synthesizers, resulting in a strain of Quicksails music that brims with shimmering textures and lush, layered harmonies. More than a full-on pivot to another style, Billington enters into a complementary mode of production that highlights his melodic sensibilities and his ear for sophisticated DAW-based composition, shifting into another natural step along the wide arc of his musical trajectory.

Each track on Blue Rise unfolds as a self-contained world replete with fluctuating tiers of fine-grain synthetic tones that morph in real time as they stack together into dense systems of polyrhythmic activity or smear into passages of all-consuming drift. Quicksails’ tracks generally float over central bass phrases and percussive synth elements that shift over time in their tonal qualities and the harmonies they imply, sketching out a path for the listener to follow while resisting the easy narrative of static, loop-based composition. More than ever, the spreads that Billington lays out on Blue Rise reveal vast depths of diverse, layered sounds as they come to incorporate everything from washes of piano and square waves, to tones that evoke acoustic instruments like wind chimes, shakers, and cymbals, to massive low end bursts that prod his sessions up into new levels of intensity. When Billington decides to complicate the atmosphere of his music with more dissonant synth work, or lace his production with distorted samples and disembodied voices, the results further complicate the range of discrete sonic scenes that he visits within the album’s universe. With the trained ear of a drummer, Quicksails knows how to maintain a sense of constant flow and forward motion within the context of relatively short, 4 to 6 minute tracks, resulting in pieces that end far from where they began while remaining holistically tethered to a central mood or implied rhythmic grid.

Strata of percussive synth tones and prickly patches of pure texture animate Blue Rise, inching it closer at times to the realm of mid-20th century academic synth experimentation in the school of Stockhausen, Parmegiani, and Subotnick. In other moments, washes of gorgeous, consonant synth performance steer his work closer to the world of modern ambient music in the sphere of Steve Hauschildt and Oneohtrix Point Never, New Age explorations from Iasos to HausMo label mate Pulse Emitter, and cinematic grandeur in the spirit of Vangelis and Tangerine Dream. Above all, the presence of Florian Fricke and his work with Popul Vuh informs Quicksails’ vision on Blue Rise, which manifests most evidently in the composition “Florian’s Brush” — a serene yet dense pasture of synthetic choral voices in the style of the Aguirre soundtrack, subtle percussion accents, and glistening bell melodies that drip from above the treeline. Taken in total, Blue Rise lays out a menu of contrasting sentimental spaces and self-contained sonic tableaus, each of which refracts the sun’s light out across new directions and terrains. The album cements Quicksails not only as a master synthesist and arranger of far-flung sound sources, but as a composer attuned to the time dilating properties and the instantaneous emotional impacts of the zones that he lays out before us. 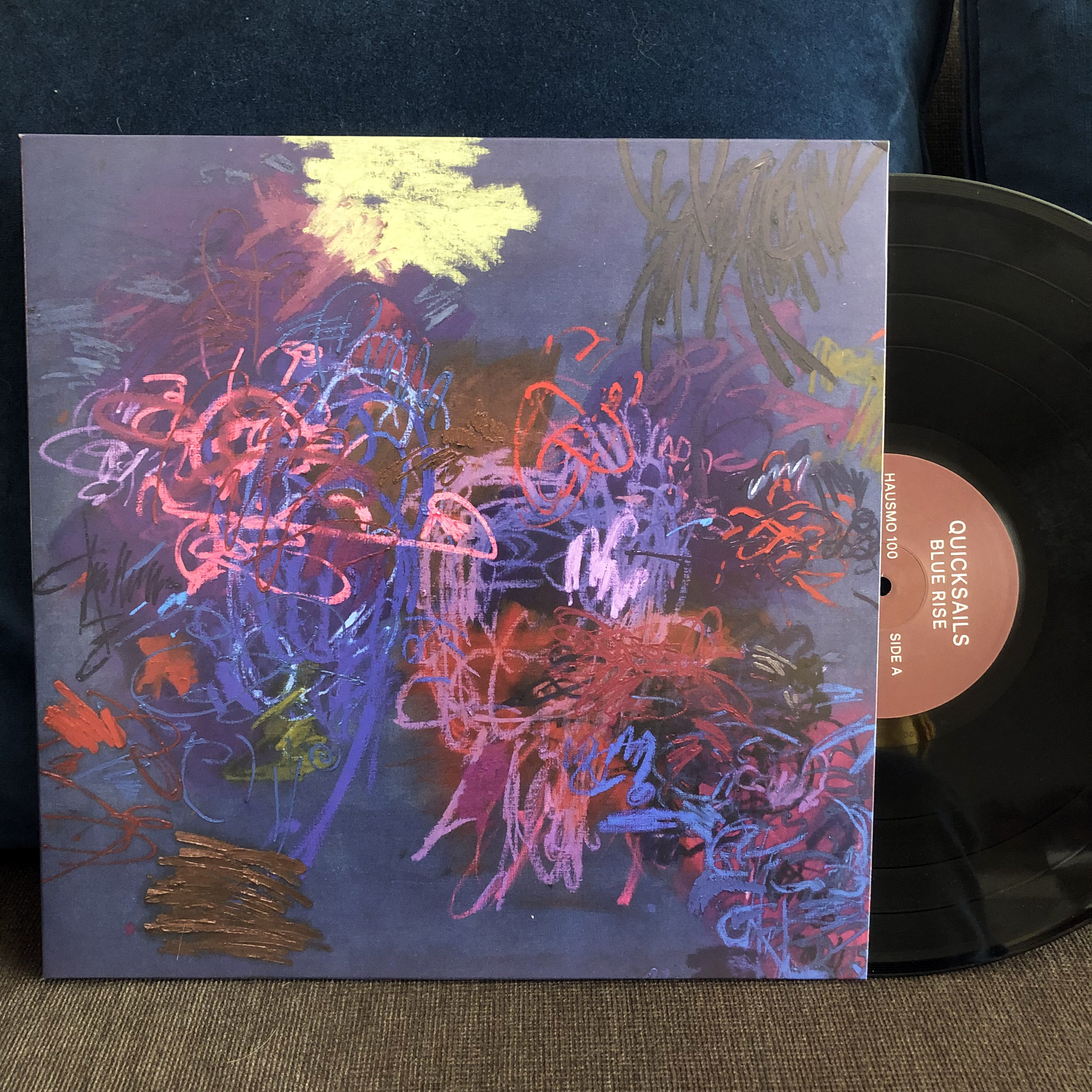 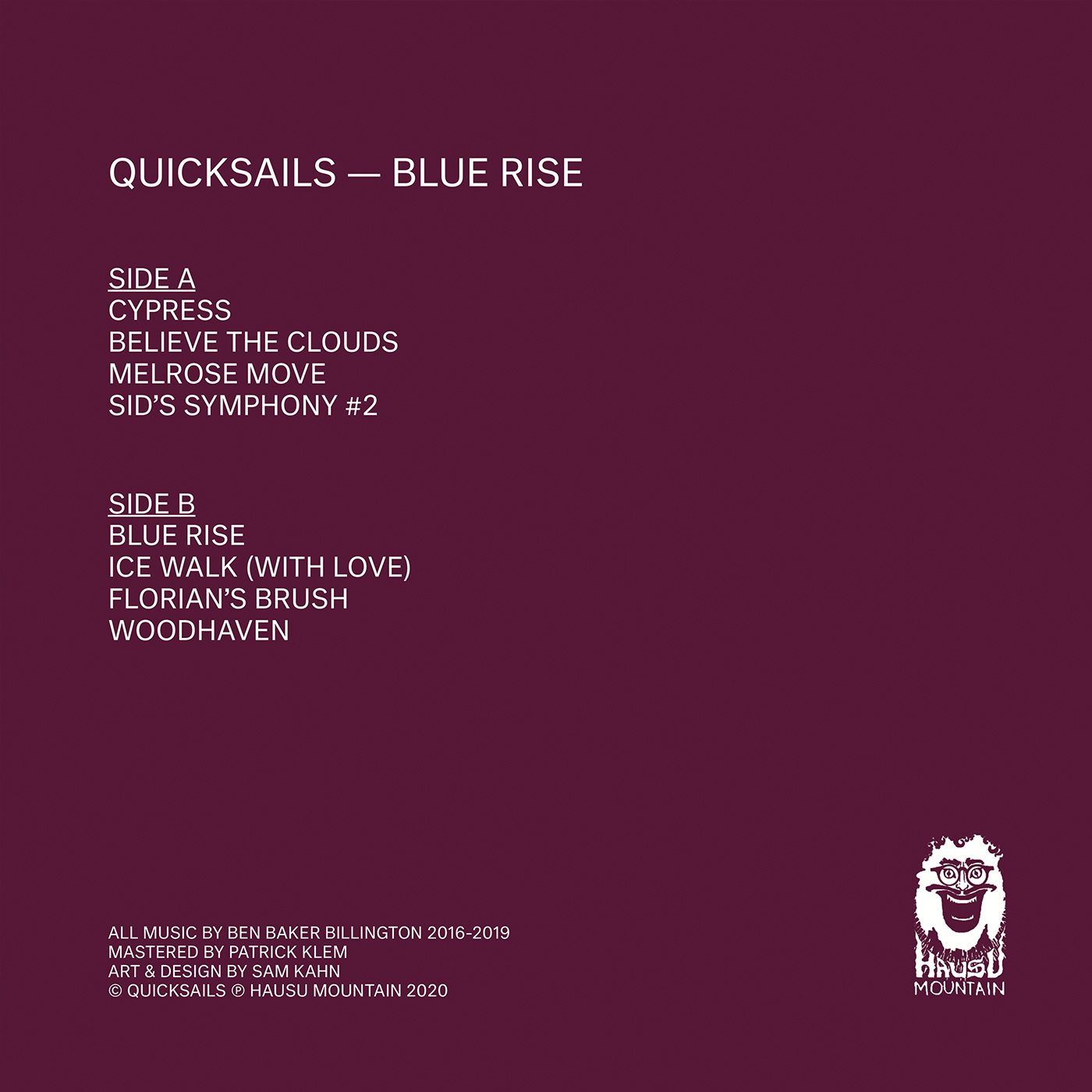 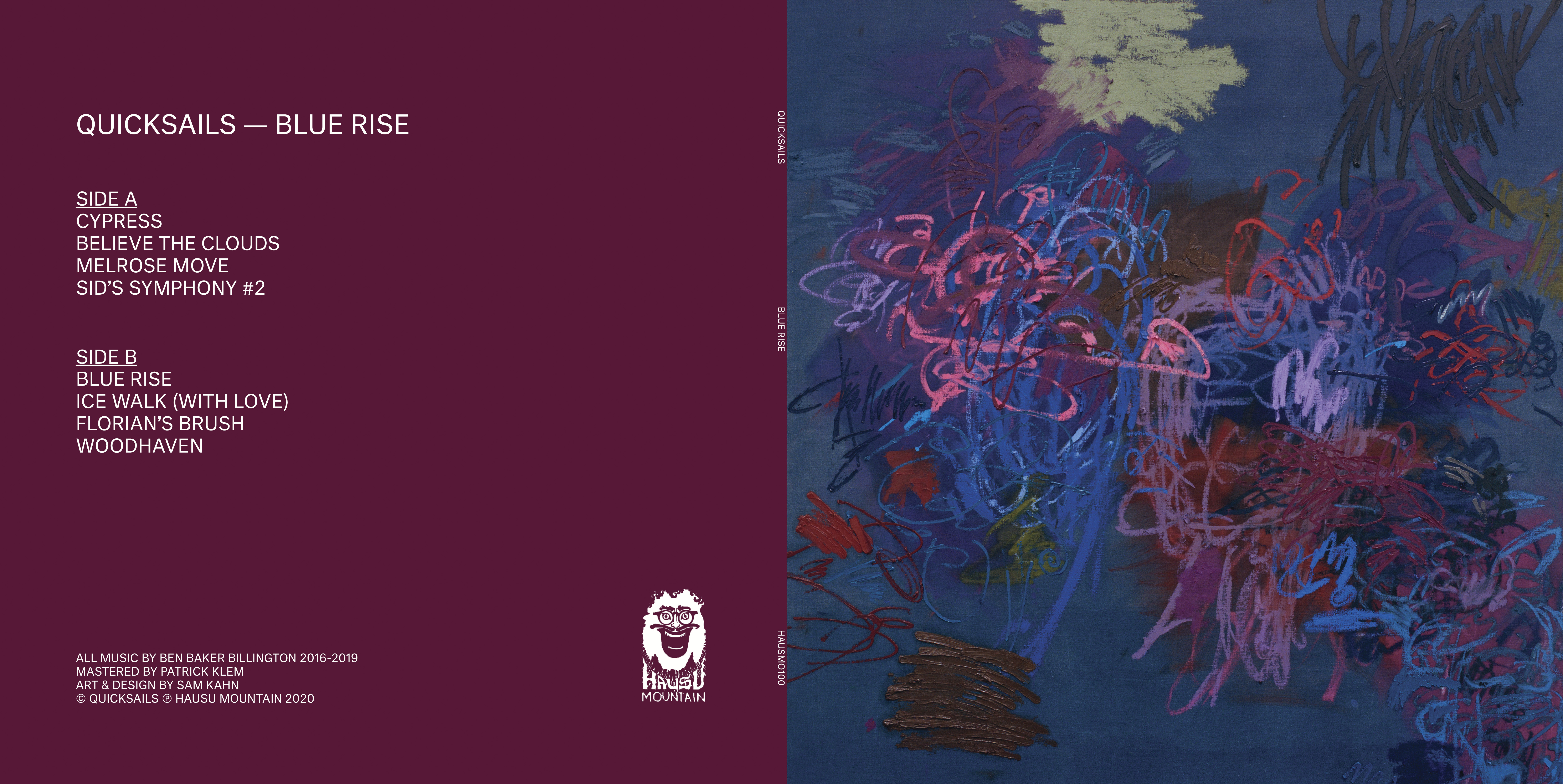 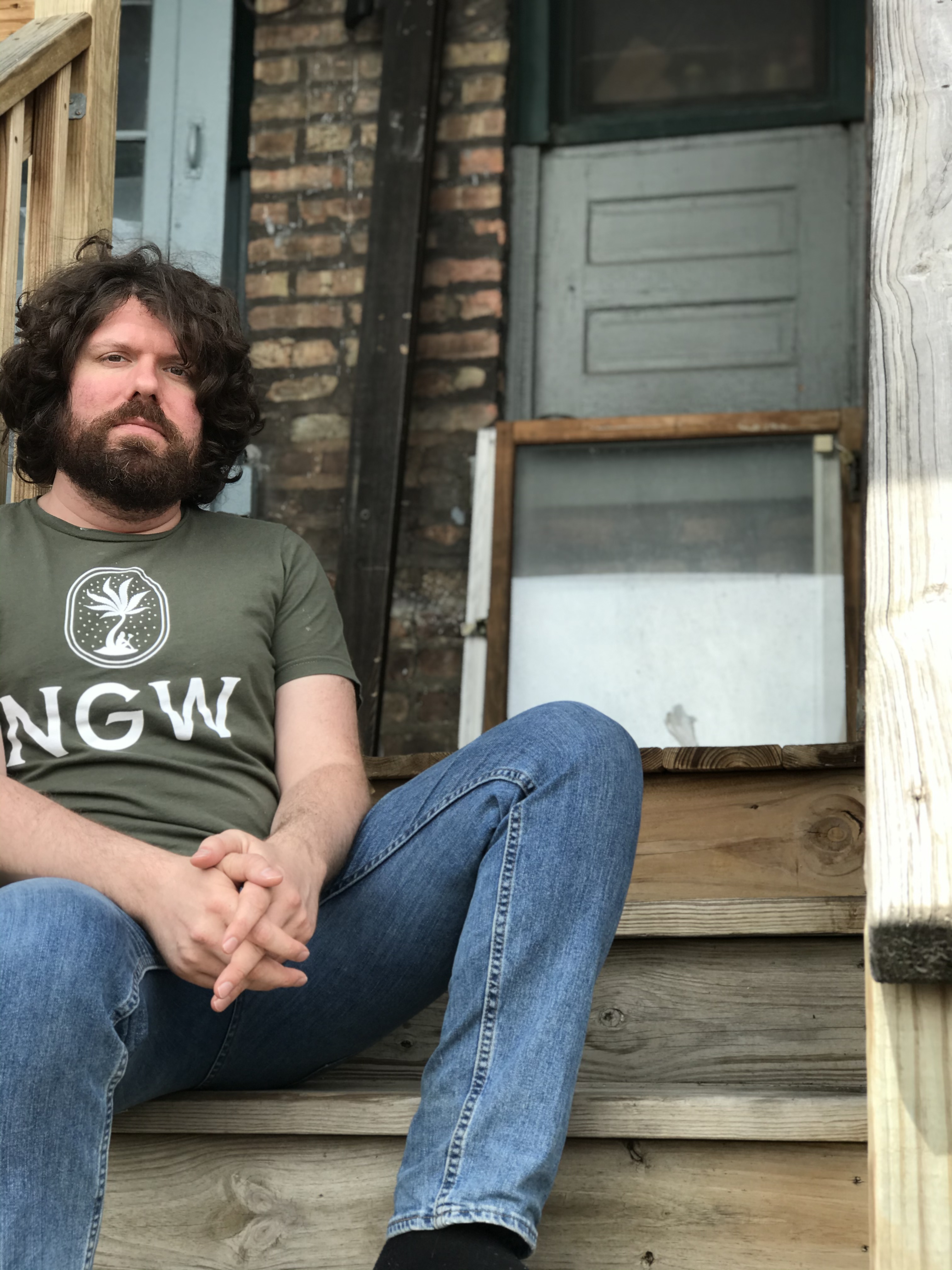