To be released on CD and cassette (C44) on 04/09/21. Artwork by HausMo Max & Sharkula. This is the catalog page with album information and artwork. To view the store page, click here.

Underground hip hop wild card Sharkula (born Brian Wharton) has carved himself into the grain of the Chicago music scene through 20 years of determined grinding. He records his free-associative verses over a wide spectrum of scene-sourced beats and has built a catalog of over 40 individual albums & EPs that he wraps in his own distinctive hand-drawn packaging. His visual art has appeared in shows at local galleries like Galerie F in Logan Square, and a cross-section of his practice was captured in the 2010 documentary Sharkula: Diarrhea of a Madman. Over the course of the last several years, he has recorded music and toured with pioneering experimental rapper Kool Keith a.k.a. Dr. Octagon. Though the pandemic has curtailed Sharkula‘s typical routine of selling his music hand-to-hand across the streets and bars/venues of the city, and has limited his ability to directly interact with fans on the sidewalk or public transit, he continues his grind and keeps making connections from a safe social distance.

Sharkula linked up with HausMo co-founder Max Allison a.k.a. Mukqs after a chance encounter at the immortal (and now shuttered) Burger King near Northwestern in Evanston, IL sometime around 2017, which led to the pair exchanging beats and verses and releasing their first collaborative album Prune City (HAUSMO81) in 2019. Take Caution on the Beach, the duo’s second full-length album, further builds on their chemistry as an MC / producer team and stretches their joint practice to new heights of fractal, freewheeling hip-hop exploration. The album embodies a shared energy and determination that continues to color their collaboration with unpredictable details, keeping listeners guessing with surprising deviations from typical forms while rooting their music in some hallucinatory vision of old-school hip-hop.

The stream-of-consciousness style in which Sharkula delivers his verses floats in a middle-ground between the disciplines of rap, surreal comedy, and free-form poetry. While he maintains vestiges of classic hip-hop tropes, and makes sure to float within reliable rhyme patterns, Sharkula forsakes typical verse-chorus-verse song structures in favor of linear quasi-narratives that tend to streak off into bizarre scatological tangents. His dreamlike rhymes zig-zag between direct tales of his daily grind, to archaic cultural references to decades-old sports and TV, to more abstract commentary on the nature of life, to oblique wordplay, to a brand of unashamed irreverence colored by tales of pooping or masturbating. Within Sharkula’s haphazard flows, each of these worlds and more unite into a nuanced portrait of his day-to-day thoughts and activities that all boil down to the chaotic yet ultimately benevolent essence of his life.

Sharkula approaches the spontaneous construction of a verse from the perspective of an improviser, and recorded every track that appears on Take Caution on the Beach as a single unbroken vocal take – all captured by engineer Doug Malone at his Jamdek Studios in Chicago. This workflow aligns him with many artists in the Hausu Mountain discography who showcase recordings focused around improvised flourishes and live-in-the-studio performances. The verses that fill Take Caution on the Beach, however, represent a new peak for Sharkula in terms of the insight and bizarre humor he brings to each track, as well as a sharpened clarity of verbal delivery. Wharton doesn’t necessarily view himself as an untethered experimentalist, and disdains comparisons to modern free-associative MCs like Lil B. At the end of the day, his style takes deeper root in an 80s / 90s informed-approach to battle rapping, though it winds along its own path far removed from any disses directed at imaginary enemies. Sharkula’s only opponent in his verses remains the hardship of living life day to day, struggling against inequity and striving to make connections with the people that surround and support him.

Mukqs’s production on Take Caution on the Beach keeps one foot in the beat architectures and regimented structures of classic boom-bap hip hop, while continuing his exploration of the experimental potential of 16-bit video game music and textural noise sculpting. His beats draws major influence from the horror score synths and massive basslines of the universe that surrounds Three 6 Mafia, along with the clipped samples and tight drum patterns of DJ Premier. While his productions foreground steady percussion loops that sketch out a verse-chorus-verse timeline at odds with Sharkula’s freeform delivery, his beats align with the MC’s unpredictability with their evolving melodic ideas and layered bursts of arrhythmic texture. Any given Mukqs beat delivers a bone-thick bassline and a loping drum pattern, but juxtaposes those elements against a web of one-off electronic noise bursts, all sourced from his arsenal of hardware synths.

Although the specter of the COVID-19 pandemic rears its head in moments of Sharkula’s verses — “I’m in the sauna / at the gym / it’s closed / pandemic / that sucks” —his overall message remains grounded in positivity and hope for some return to his long-standing lifestyle of deep integration into the Chicago scene and direct social connection. His words speak to the enduring spirit of the artist within the often cruel and oppressive environment of contemporary Chicago, but he never dwells on the negative aspects of his daily lifestyle. Instead, Sharkula makes a case for the restorative properties of one’s rich inner life in the face of turmoil: that our most seemingly aberrant ideas can fuel our curiosity and creativity, and our positive attitudes can shine a light to combat any existential darkness that bears down on us. 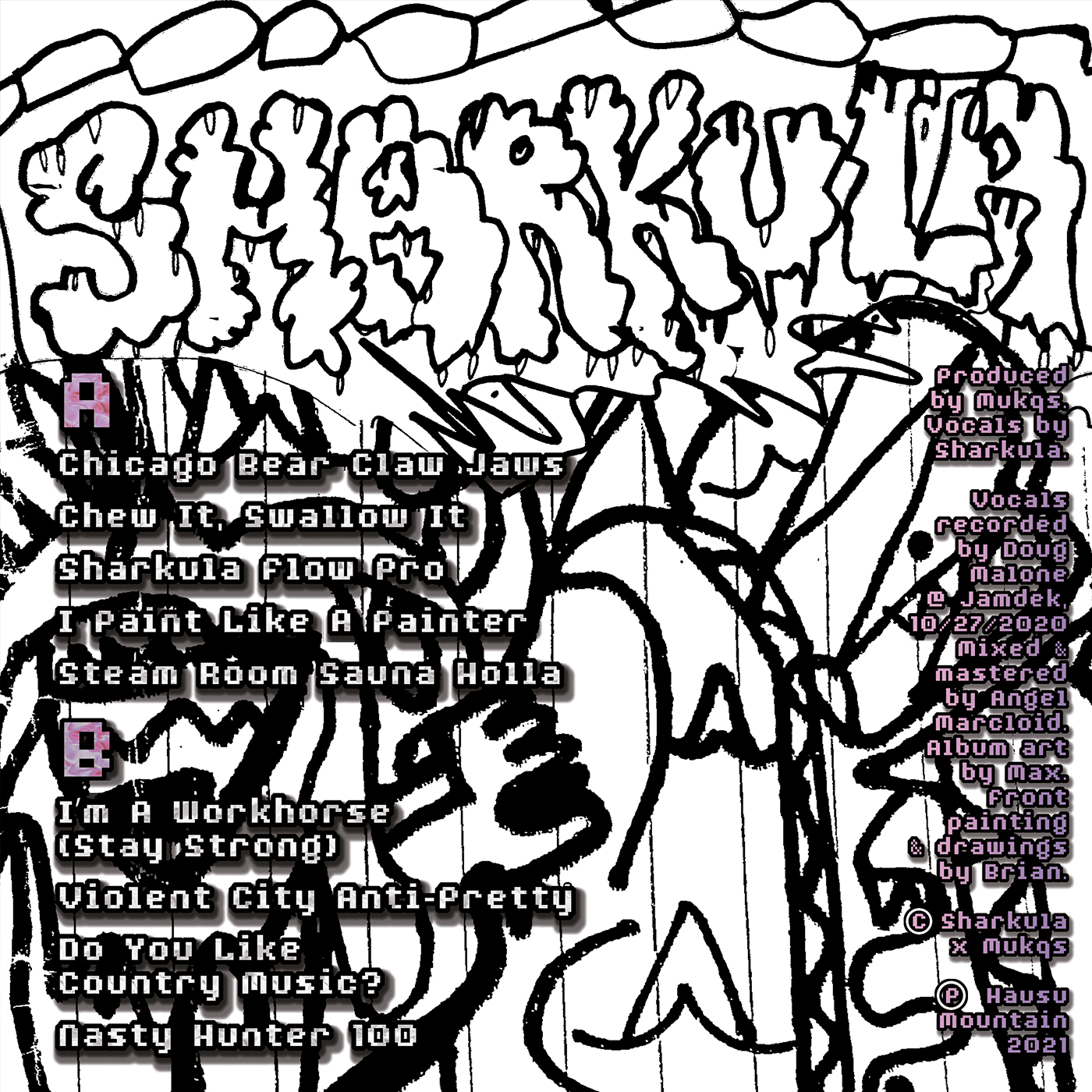 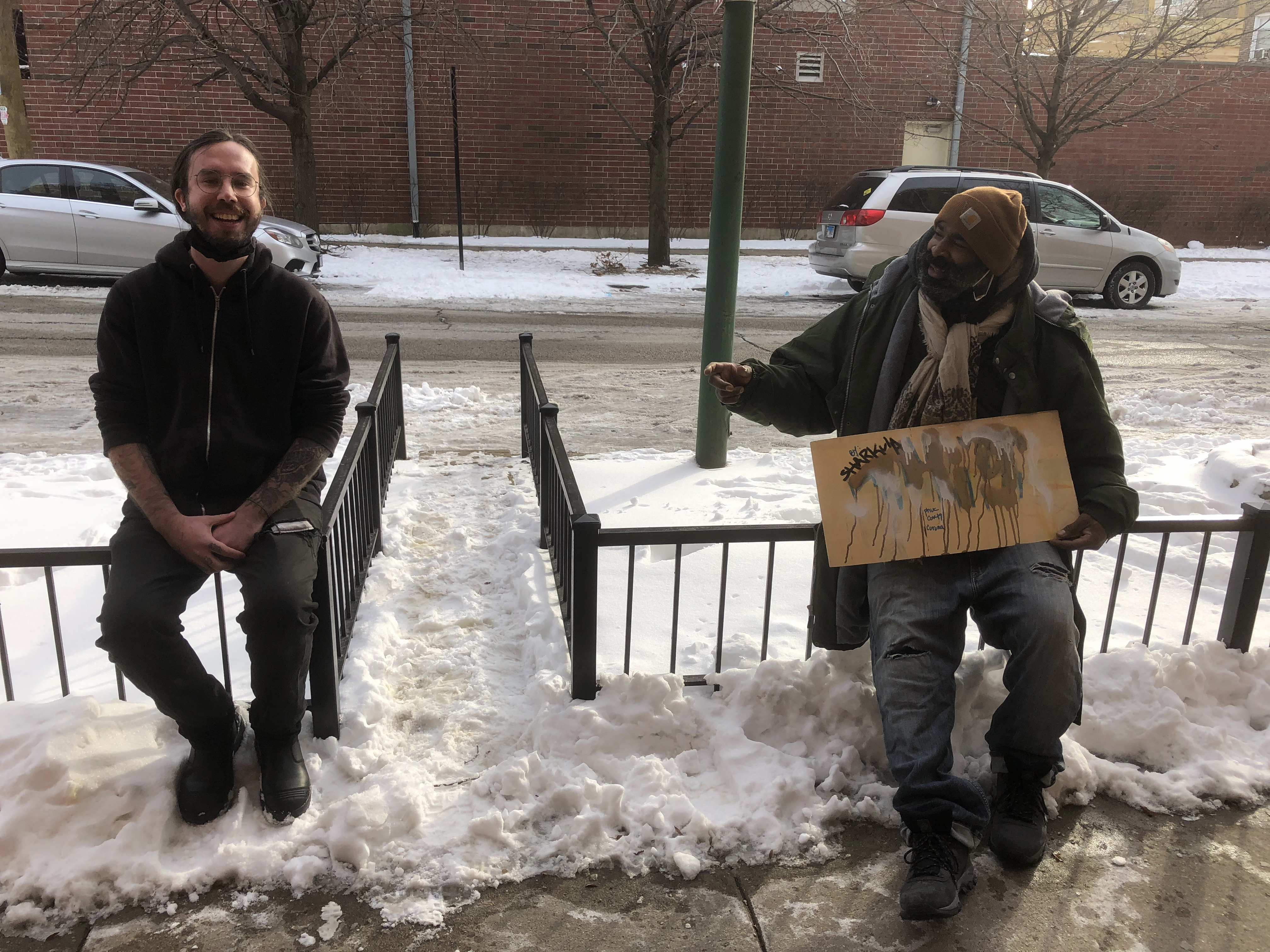 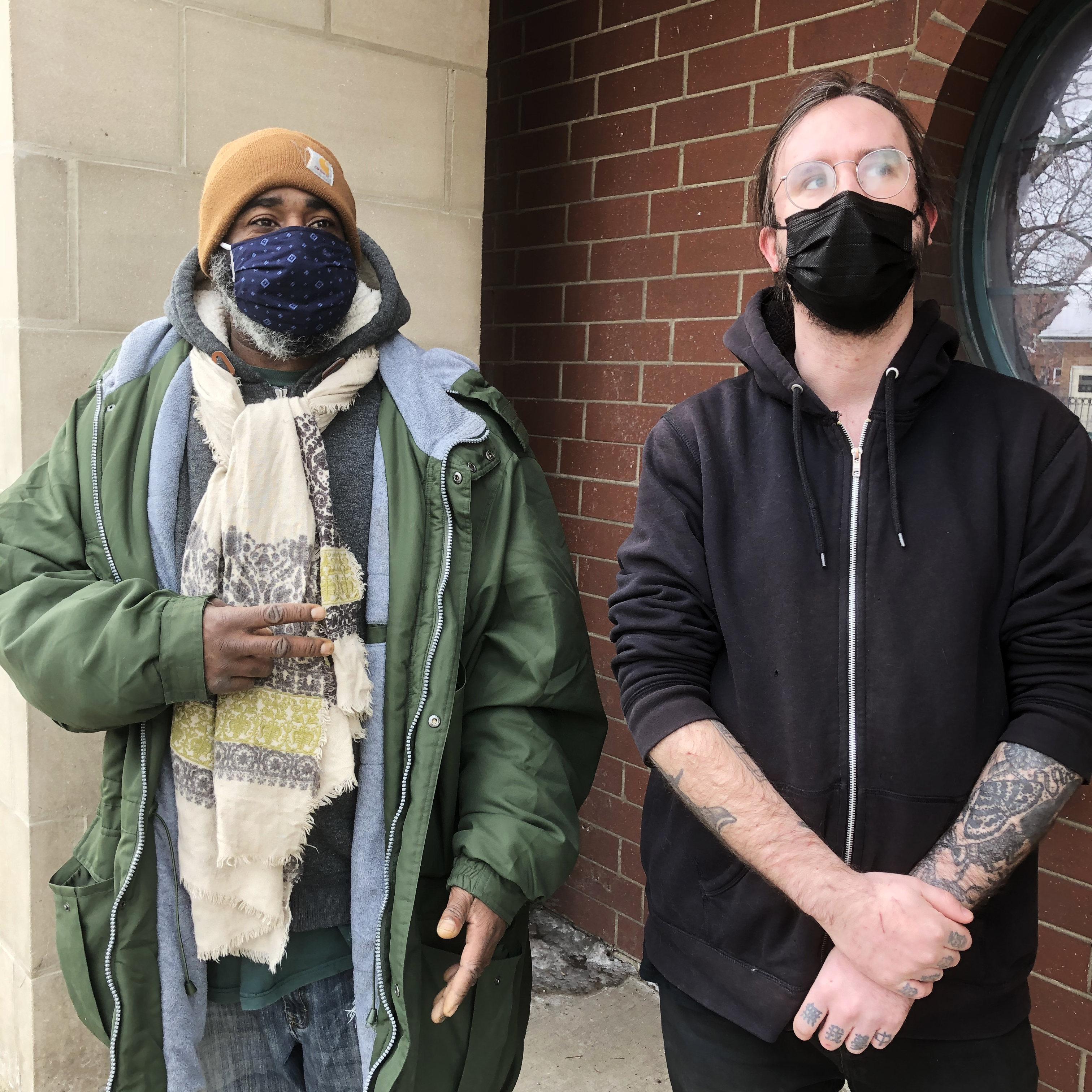