To be released on cassette and CD on 05/28/21. Artwork by Birch Cooper. This is the catalog page with album information and artwork. To view the store page, click here.

Body Meπa is the New York-based quartet made up of Greg Fox (drums), Sasha Frere-Jones (guitar), Melvin Gibbs (bass), and Grey McMurray (guitar) — a team of musicians who have each built catalogs across the axes of improvised music, jazz, fusion, and rock. Their first full-length album, The Work Is Slow, quietly emerged in a digital edition in December of 2020, and Hausu Mountain is honored to release its first physical editions. The quartet’s music fits under the wide umbrella of New York City body music, working with texture, fluid structures, extended repetition, and rhythmic interplay. Though Body Meπa could be called a “supergroup,” given their individual pedigrees, the band members look at the project as an extension of their friendship. All four live, and grew up, in New York, and their shared vocabulary is rooted in that shared experience.

The Work Is Slow lives up to its title as its slow-burning sessions spread out into dynamic instrumental narratives with sinuous peaks and lulls. The album ripples with knotty yet trance-inducing rhythms and effect-smeared atmospheres, achieving a rare middle ground between constantly morphing rock composition and mantra-like recursion. The band is patient, willing to let ideas breathe across time. Body Meπa draws its cumulative power from a vast index of overlapped musical vocabularies and skill sets.

To list the projects that drummer Greg Fox has been a part of, both behind a drum kit and performing with synths and electronics, would require its own rundown beyond the scope of this compact bio. Most recently, his solo work has appeared on LPs released through RVNG Intl. In Body Meπa, Fox’s drumming serves both as the beating heart of the ensemble and a continual source of surprising rhythmic ornamentation. His performances give the illusion of “infinite limbs” as he splays busy tom fills and concentrated snare runs into tiny pockets of time, all while holding down a groove that keeps his bandmates locked in step. Fox recorded The Work Is Slow at his own Studio Te in Brooklyn.

Sasha Frere-Jones founded the band Ui in the early 90s in New York, and built a genre-shattering catalog that collided elements of funk, rock, dub, and electronic arrangement — including collaborations with Stereolab under the moniker Uilab. In Body Meπa, Frere-Jones’s guitar work generally remains rooted in a crisp tone that captures every nuance of his spidery fretwork in high definition. His harmonic touchstones flit between the dense chord networks of jazz, the long sustain and slight twang of Great Plains guitar a la Neil Young’s Dead Man soundtrack, and the fried amp distortion of the more abrasive post-punk of the American underground.

Grammy-nominated bassist Melvin Gibbs has a beyond-diverse background in jazz, rock, punk, and freeform experimentalism — anchored by mentors including Ornette Coleman and Gil Evans, encompassing work with Arto Lindsay, dead prez, and Sonny Sharrock, stints in Defunkt and the Rollins Band, and collaborations in ensembles including Power Tools alongside Bill Frisell and Ronald Shannon Jackson and the cooperative Harriet Tubman. In Body Meπa, Gibbs blurs the lines between steady bedrock basslines and powerful lead playing, highlighting his bass both as a central melodic voice and as a crucial rhythmic underpinning to the spiraling explorations of his bandmates. With harmonic sensibilities fine-tuned by decades of breaking jazz boundaries, Gibbs floats as the solid core of the band and gently steers them down new paths in each composition.

A fixture of the intertwined experimental scenes of New York City, Grey McMurray has worked with a wide array of artists including Colin Stetson, Ali Sethi, Alarm Will Sound, John Cale, and Sō Percussion, with whom he composed a full-length album in 2012. He released his first solo record, Stay Up, on Shahzad Ismaily’s Figureight Records in 2019. In Body Meπa, McMurray’s impressionistic guitar drips into the band’s dense arrangements in dollops of striking color, blurred by delay effects, short looping figures, and notes frozen into standing drones. When his playing soars into flights of heavy lead melodicism, the crackle of distortion rips through the mix in bold contrast.

The Work is Slow will be released on May 28th on CD and cassette with expanded artwork from Birch Cooper. 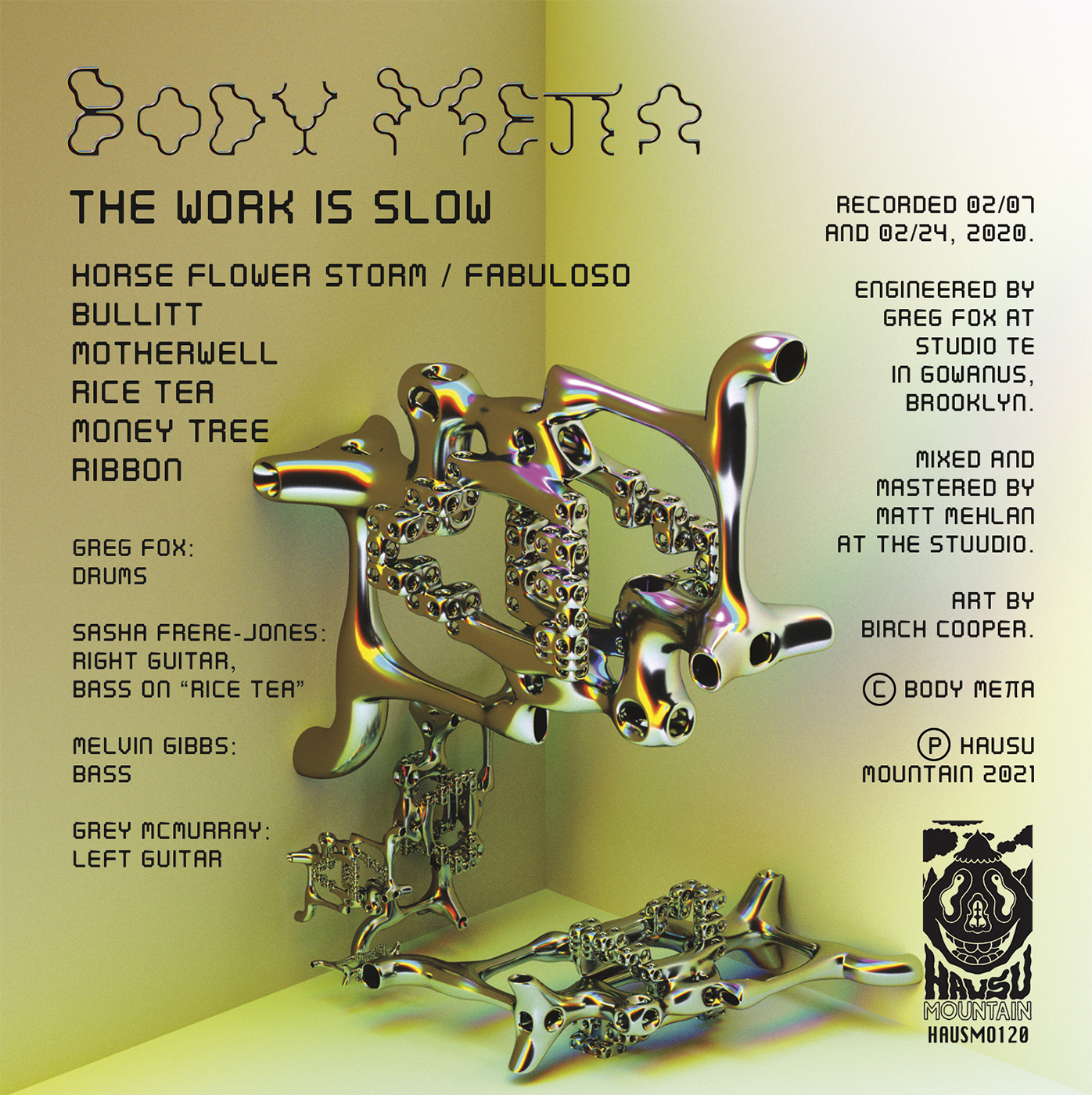